A strange traffic jam where I don't know if we were in danger or if it was normal....

I am here for work. So I stayed up late toiling away in my hotel room last night preparing for a demo of something I was building. My room is small and the AC needs adjustment every hour in order to keep it comfortable. Outside, I'm told by my boss, there is no place for me to go alone. No where to "take the air" and wander as I'm used to doing in the States. There is only the roof. I go there in the morning to excercise and when I'm done, flocks of large green parrots wheel overhead shrieking and clacking. Their sound becoming one of a thousand sounds happening at that moment in the air.

It's hot and muggy, but not as bad as it is during the intolerable summer. My co-workers all show up to the office around 11 to noon, all cheeirly exclaiming "Shuvo shkokal!" and "Assalamualaikum!" to me. They did it in English at first, until I made a point of telling them I wanted to learn as much Bengali as possible. I'm learning some phrases too. I've memorized a few that I can rattle off on the phone to my driver that has won the admiration of my co-workers ("Ami niche ashbo ektu pore 5 minutes") and I have fun doing it. Being somewhere new, learning a new language, I'll admit...it's an escape from one's self.

And everyone stays until 7 or 8. I think this is by design because first, traffic is so horrific in this city, it puts to shame anything I've seen in Mexico City or even Seattle, WA for that matter. And two, the sun has set. The heat is still there, but there's something alive and celebratory about the nighttime in Dhaka. Little fires shoot up on the wheeled carts of some of the boys making small pastries. They all seem to have a small propane flame that calls attention to their brightly painted carts. Then there are the endless open air markets that ramble on for block after block...miles and miles of this all spreading out through a city of 20 million people. It's staggering to try and understand how dense this place is. How insignificant we are in the face of the organism that is Dhaka.

Nothing remarkable to report other than my ride home tonight. It was a mellow day at work that was preceeded by a quick commute in. 20 minutes! I asked about this and my co-workers informed me that Friday is their Saturday. Our office is one of the few places that works on Friday. It's a religious day, apparently. How deceptive that ride was...

I left work at 5:45 after arranging with a co-worker to tour Old Dhaka tomorrow (which I am greatly looking forward to) and summoned the driver. I usually have him take me to the Westin for dinner and a wine after work, but this is getting expensive, so I just had him take me back to my temporary home. All went well until we neared the Prime Minister's compound. Traffic began to thicken and clog and then, in a desparate move to avoid the inevitable, he turned down another street. And suddenly, everything ground to a halt.

The vibe was weird. He could sense it too. I spun up Google and typed in English questions and received the Bengli translations which I asked him. He smiled nervously and said "all stopped". Boys hanging off the backs of buses and on top of them, for that matter, started to clamber down. People were getting out of cars and rickshaws. And then, after about a half hour, this steady stream of people suddenly, and very quickly started moving away from our intended route of travel, some running. Cars were frantically trying to turn around. I couldn't tell what this was about or if it was panic of some sort...but it didn't seem good. So the driver and I looked at each other and I turned around and just started guiding him out...we kept backing up and I would tell him if this pocket or that pocket was clear. We worked like this for 15 minutes to extricate ourselves, then he just leaned on the horn and barrled forward, scattering pedestrians from in front of us, until we had turned off onto another road where traffic was flowing again. This time with police sirens wailing.

We shadowed the police until we were in a part of the city I had never seen before. Rutted dirt roads. Wild dogs loping along on the side. More people scurrying along in the darkness, and dust kicked up everywhere. Giant clouds of it. He sped up and these headlights would come at us headlong through the clouds and we all swerved at the last minute and missed, and then kept going. Strange heaps of rubble, more pockets of tea shacks and stalls with flickering flame lights and then into another district. Stalled again, but the vibe was less weird. Finally an hour later, we rolled through this new part, more flashing alleys and then the call to prayer. The muezzin singing his haunting song at top volume on the speaker. This went on for some time.

When he finally turned into the security checkpoint at Gulshan, his shoulders visibly relaxed. He turned to me and finally smiled. He had been nervous. I still don't know what it was all about. Time enroute home...2.5 hours. 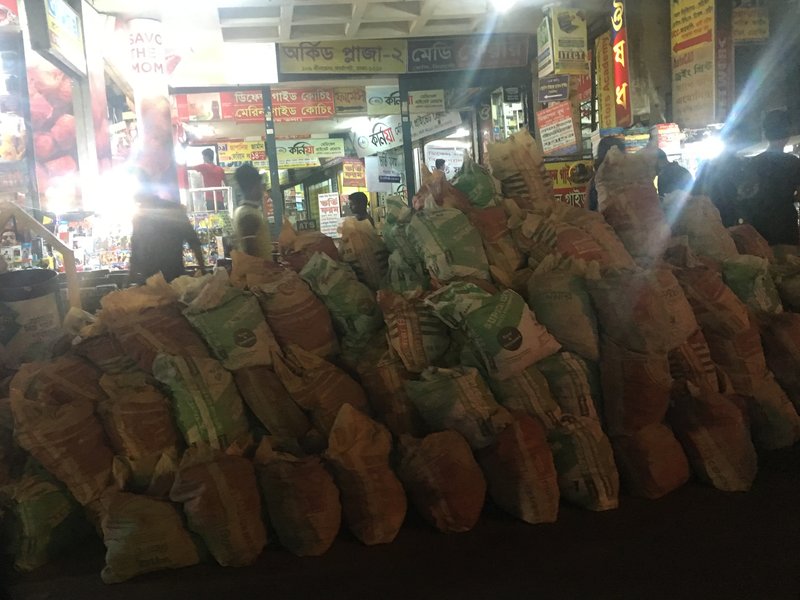 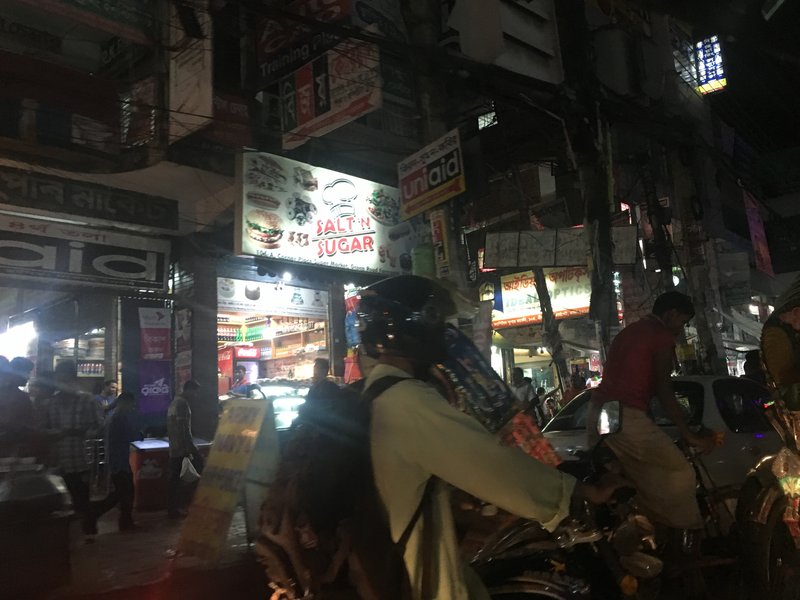